Rodez is the Capital of the Aveyron Region. In Paris, the shop “A la Ville de Rodez”, in the heart of Le Marais, is one of best place to find genuine aveyronnaises products.Since it was founded in 1920, this shop has supplied generations of Aveyronnais settled in Paris with products which could’nt be found anywhere else in the Capitale. Products with strange names like estofinado, rissoles, aligot. Anyone seeking for exceptionnal french culinary products will find them at A la Ville de Rodez. Once the door shuts behind him the client is caught in a trap. His eyes will be dazzled by all the forms and colors of the numerous jars and bottles ; his nostrils will be tickled by the fragrances and scents floating in the shops.

95 years after its foundation, this shop has not conceded an inch to modernism, marketing and packaging used in the agro-food business of XXIe century. The shop window is always the same one.It dates back to the 50’s like the weighing machine.

The majority of the good producers of the Aveyron Country find here an embassy for their richnesses which will be found on the Parisian tables. And that is known. For decades, stops it with ear continues to transmit this worthy address. Artists who live in the neighbourhood -the famous old district of Paris called le Marais- can be met at the shop.
All the customers of A la Ville Rodez are not native from Aveyron. The same applies to its products. For example, a red label jare of bean from Tarbes can be found on its shelves, not to mention the plums coming from Périgord. (See Below)
One will probably meet Maurice, Stephanie or Brigitte ready to give a receipt or to transmit a know-how.. The kind of trick like Verjuice, this green grape juice used by our grand mothers which became so rare. 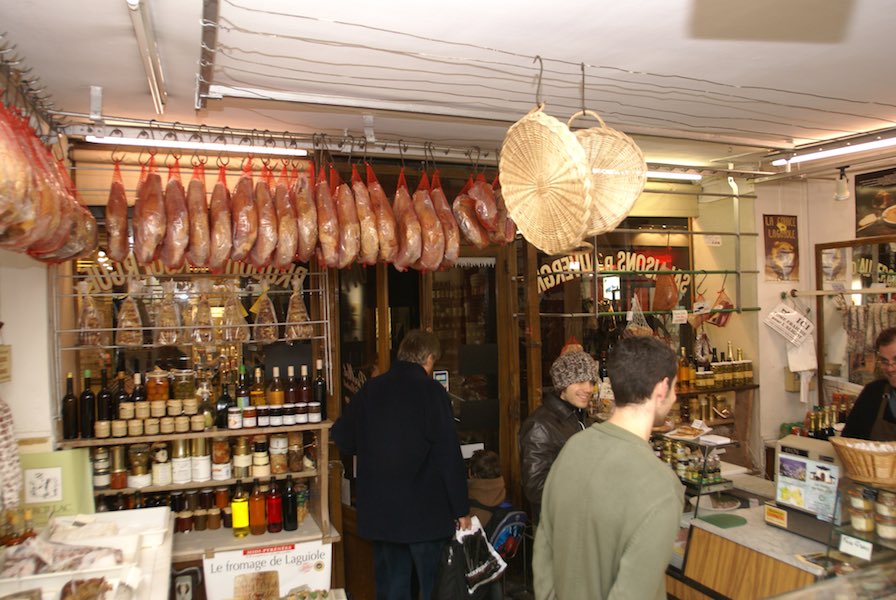 A la Ville de Rodez is the type of shop where you will find products to prepare an exceptionnal whole meal including wines. For example a Montbazillac bottle white wine perfect to accompany the foie gras duck, a speciality of the house. Among all these culinary richnesses lies a treasure, the famous truffles which can be ordered between January and February.

Ouvert every day except on Monday, from 10AM to 2PM and from 3PM to 8PM