You will tread a weird universe of amazing rocks. Water and wind transformed the grey rocks of the Causse Noir into a wonderful city of stones which has now become the shelter of a delicate flora which fragrance changes with the season and the hour of the day. 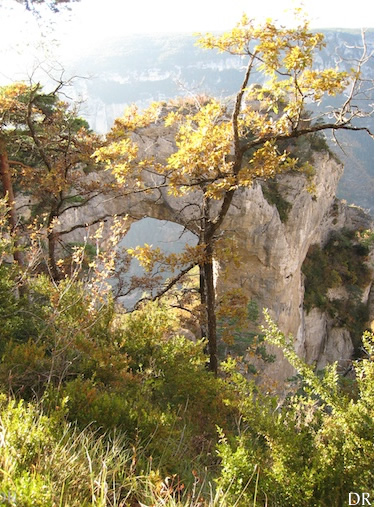 You can walk on well indicated footpaths or take the little green train that will lead you to the heart of this imposing site.

EXPLORE the city with the 7 keys to discovery: Geology, Panoramas, Roc’Art, Traces of Life, Flora, Martel the Explorer, Legends. Visiting la Cité de Pierres in Montpellier-le-Vieux is one of the most beautiful day trips to do in Aveyron. An outdoor activity that can be enjoyed with your family, in groups or on your own.

La Cité de Pierres is on a promontory nestled on the edge of the Causse Noir and overlooking the Dourbie Valley.

Averyron’s current geology was formed more than 170 million years ago when the sea still covered the region. During this time there was a tropical climate, and the sea covered what was to become the Causse Noir, similar to the atolls of the Pacific. The warm and deep waters shelter an algae and coral reef in which many sponges, molluscs, sea urchins and crustaceans thrive.

While geological forces were shaping the layout of la Cité de Pierres, the slow task of sculpting the city’s monuments was taking place in the very same rock.

– Traces of Life
12 rock shelters and sheepfolds from the Neolithic period to the Middle Ages.

La Cité de Pierres is an integral part of Aveyron’s history. It was inhabited continuously from the Neolithic period (6000 – 3500 BC) to the Middle Ages, through the Iron Age and the Gallo-Roman period.

From the end of the Middle Ages, la Cité de Pierres in Montpellier-le-Vieux gradually fell into oblivion as it became difficult to access and Edouard Alfred Martel remains the great explorer of the Montpellier-le-Vieux site and its “Cité de Pierres”:
with his vision, he was a true pioneer in a new era of discovery.
with his energy and his talent as an explorer, challenging all the technical difficulties of the time.
with his numerous publications which have endlessly spread his passion to many people.

– Legends
Tales and beliefs of the lost civilization

La Cité de Pierres in Montpellier-le-Vieux has been the subject of many legends and beliefs since antiquity, thanks to the strange and fantastic shapes of its architecture. .

The old stories about the city are among the most fascinating stories of the Occitan region. 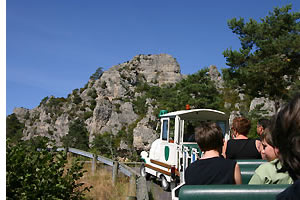 If you wish it, our small green train will lead you, without effort, in the heart of this unique site classified in the Building industries of France Heritage.